It’s been a while since I’ve had a chance to write up an update, but I’ve still been busy! My new tail lights have arrived, and my 12v power distribution board has been ordered. They work well, and like the headlight I ordered, have the indicators built in so they look pretty cool. They should attach pretty easily as the original indicators stuck on the side in a similar way. I also ordered a pair of LED number plate lights as well.

The biggest challenge will be filling in the space where the original incandescent tail light housing fit as it’s quite large and a pretty unusual shape. My current plan is to 3D print a plastic part to fit in there and seal it up with some silicon. This should work pretty well as long as I can get the fit right.

I’ve already done most of the 12v wiring, and hooked it all up with a bunch of soldering and spliced wires. However, this is kind of “janky” for lack of a better word and looks very messy. There also isn’t a lot of flexibility and I am relying on relays that make and audible “click” every time something is switched on/off. As I was just about to order another iteration of my battery testing PCBs, I decided to make a proper PCB power distribution board.

The power distribution board is designed to be hooked up to a standard 12v battery (either Lead Acid or Lithium Ion works fine). It then reads various 12v inputs such as the ignition (ie key), indicators, and high beam switches and controls the relevant outputs. I also had problems with finding a flashing relay that would work correctly with my LED headlight that had some smarts inside. Even proper LED flashing relays would not work correctly due to the way the indicators that are integrated into the headlight, are wired internally. As a result, the power distribution board is run by an ESP32 SOC which means I can control the flashing timing via software, and is not reliant upon any physical characteristics of the circuit.

Another thing I’ve designed into the power distribution board is ignition control. Because the ignition output is ultimately controlled by an ESP32 (with built in WiFi and Bluetooth), it means I can implement a keyless ignition feature with a mobile app and/or smart watch. I’ve also included a CAN transceiver on board so that I can interface with the motor controller for realtime statistics like power draw/battery voltage, and also the TC chargers to start/stop charging, and control the rate of charge requested from the chargers. 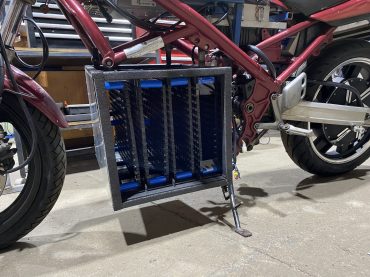